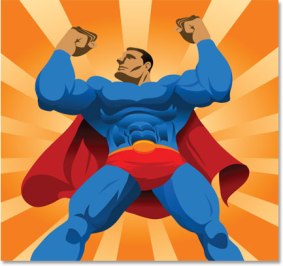 Dr Deming’s red bead experiment simply yet brilliantly shows that, when we rate and rank people, we are mostly rating and ranking the effect of the system on the people.

“Apparent performance is actually attributable mostly to the system that the individual works in, not to the individual…the so-called merit system introduces conflict between people and destroys co-operation. Emphasis goes to achievement of rank, merit, not on the work…judging a person, putting them into slots, does not help them to do a better job.” (Deming)

I think anointing certain people as heroes because of what the system enabled them to achieve is a very unhealthy practise (for the supposed heroes’ and for the rest).

After explaining to a colleague how ‘the system’ has a huge influence over what someone can achieve, she made a really great ‘aha’ comment back to me:

“…that explains why I couldn’t work out whether that project manager working for me was any good!

I now understand that I was judging him when, in fact, I should have been considering what the system was allowing him to achieve – the first project had a clear sponsor and much backing, the second project was an organisational orphan with difficult people and many historic issues, a virtual hospital pass!”

I am a mathematician at heart and Dr Deming used a wonderful formula to explain the above…bear with me:

(i.e. the individual’s contribution combined with what the system enabled him/ her to accomplish will determine the outcome s/he can achieve)

Deming goes on to explain

“To rate the individual we need to know x. Unfortunately, there are two unknowns and only one equation. Johnny in the sixth grade knows that no one can solve this equation for x.

Yet people that use the merit system think that they are solving it for x. They ignore the other term y(x), which is predominant.”

Now, a standard response to the above from people working in a command-and-control system is as follows:

“…but some people really are rubbish and/or lazy… and the above allows them to use the ‘it’s the system’ thing as an excuse!”

A couple of thoughts back:

Rating and ranking them ignores and hides the above. It tries to make it their problem….but who is responsible for the environment in which they work?