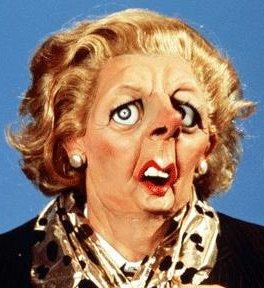 “Power is like being a lady….If you have to tell people you are, [then] you aren’t” (Margaret Thatcher)

Now, love her or loath her2, Thatcher’s words make an insightful point.

And this point is the same for the rather overdone ‘leader’ word.

So, to a definition:

“Leadership: The action of leading a group of people or an organization, or the ability to do this” (Oxford Dictionary)

Calling yourself a leader

I wish people in hierarchical positions would stop shouting about ‘being a leader’…that they are ‘leading people’…and all the other ‘leadership’ presumptions.

As I wrote some time ago, you are only truly a leader if people choose to follow you, for themselves.

(Anything else is only really compliance, through fear or perhaps indifference)

Personally, whilst I’m totally fine with Executives, Directors, Managers etc. (i.e. people with the titles) taking time to understand about leadership, I’d rather they never ‘told me’ that they were leading me.

Stick with the title that you’ve been given…and then ‘we’ (the people) will decide whether to follow based on your actions (as opposed to words) and abilities (rather than your assertions).

Conversely, ‘we’ (the people) may come together and try to lead an organisation to a place where the titled people aren’t, or haven’t yet been, heading. In which case, it would be worth those with the titles sitting up and taking note (rather than attempting to shut it down) – perhaps there’s something important within!

This post ISN’T written in any way to belittle or put down people who would like to lead ‘us’ to some better place.

It ISN’T to be disrespectful to the people currently with the titles – I ‘get’ that organisations need some form of structure.

In fact, it’s the opposite, it’s to say that many (most?) people crave to be genuinely led somewhere great…and this is only likely to happen if those put into positions of power ‘get over’ the leader word…and act as one of the people.

Here’s a rather humbling quote that turns the ‘I am your leader’ boast on its head:

“Go to the people. Live with them. Learn from them. Start with what they know. Build with what they have. But with the best leaders, when the work is done, the task accomplished, the people will say ‘we have done this ourselves’. ” (Lao-Tsu)

Leading is a potential outcome of what you do (actions) and how you behave (abilities), not a badge you can demand or procure.

I wrestled with using the quote at the top. It brilliantly suggests that “if you have to say you are leader, then you’re not” but I find myself wishing that it hadn’t been Thatcher who said it. She was given the label ‘The Iron Lady’…which was then used to lampoon her leadership style1.

This got me thinking: Why am I uncomfortable about this irony? Well, using a quote from Margaret Thatcher and Lao-Tsu on the same page rather grates with me.

So, was Thatcher a leader in the sense that I use above? – well, yes, there were lots of people that wanted to follow her.

Was she a leader for the whole country? – absolutely not. Due to the vagaries of the UK’s ‘first past the post’ voting system, she used her power to take the country to a place where the majority of people didn’t want to go3…with millions suffering in the process…and, arguably, generations (still) suffering from the outcome of her economic ideology…but that’s just me being political 🙂 .

What about the power word and its relationship with leadership?

I reflect that power and leadership do not occupy the exact same space:

…perhaps the secret to meaningful and sustainable leadership is to closely match the sphere of leadership and power. Any major imbalance has the potential for overthrow from within or disruption from outside.

Margaret Thatcher is treating her Cabinet (team of Ministers) to a meal at a restaurant:

Thatcher: Yes. I will have the steak.

Waitress: And what about the Vegetables?

Thatcher: Oh, they’ll [The Cabinet] have the same as me!

I’ll ‘nail my colours to the mast’ and say that I wasn’t a fan of Thatcher (I’m being polite)…but I recognise that many people were.

Put the other way (and with a little bit of maths): 67%, 69% and 68% of the eligible voting population didn’t vote for her but felt the effects of her power.

Now, you can chide the people that didn’t turn out, but you can’t say that they wanted to follow her.