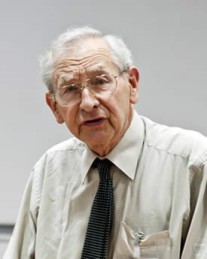 Peter Checkland is a British management scientist who thought about systems in a different way.

He started out working in research and development for ICI, a large British chemicals company and rose through the management ranks, to lead a 100-strong group in process and product development.

This role encouraged him to search the literature of the management sciences to assist. However, what he found didn’t match with his experiences and management needs. The systems theory didn’t fit in practise.

Interested in this apparent gap in knowledge (and after 15 years with ICI) he switched careers, and joined Lancaster University (UK) in 1969 as an academic, with a research domain of systemic thinking.

The outcome of the work that he led within his Systems Engineering department is the approach known as ‘Soft Systems Methodology’ (SSM), first published in 1972 and subsequently evolved through hundreds of action research projects and further writings. SSM is described in detail in the 1981 classic book ‘Systems Thinking, Systems Practice’.

Professor Checkland has since retired from full-time work.

Checkland labelled the existing body of systems work as ‘hard systems thinking’, which he criticised as assuming that systems are concrete ‘things’ that can be set out and agreed upon.

Checkland didn’t accept this state – the rather important factor of ‘people’ was missing from the equation. He understood, through his time practising management, that it is a matter of interpretation as to how we appreciate our world systemically. ‘You’ and ‘I’ do not see the same thing, neither do we share the same ends, and no matter how hard we might try to (let’s say) ‘educate’ each other, we will always have differing perspectives.

Checkland wrote that “none of these [hard systems thinking] approaches pays attention to the existence of conflicting worldviews, something which characterises all social interactions.”

This makes improving systems a whole lot harder – a bit like knitting fog!

Have you ever noticed that it is rather common in conversations (such as business meetings) to think that you and others are talking about the same thing, and are ‘in agreement’…only to find out much later that you each held materially different images in your heads? So much so that you very much weren’t in agreement!

Checkland led the creation of a newer school of soft systems thinking, built around the reality that:

Put simply: you (as some supposed improvement expert) might have the most amazing definition of ‘the’ system, its problem(s) and likely solutions…but if others (and, in particular, your senior management) don’t see it this way then you aren’t going anywhere!

You first have to understand the people, what they think, and why (where this most definitely includes yourself)….and then do something meaningful with this. This is to ‘think about our thinking’ – a far harder, yet more worthwhile, proposition.

Soft Systems Methodology, as derived by Checkland and his colleagues, is a systemic process of inquiry into ‘problematical situations’ in order to define and take ‘action to improve’.

If you want to get an understanding of SSM then Checkland (and his colleague John Poulter) wrote a book specifically for this:

Learning for action: A short definitive account of Soft Systems Methodology, and its use for Practitioners, Teachers and Students (2006).

I think it’s fair to say that, whilst SSM achieved something of a following in the UK over a period (with hundreds of action research projects performed), it is intellectually challenging and this is perhaps why it didn’t exactly travel around the world and it hasn’t really continued.

Far ‘cooler’ (or is that easier?) things gained a following instead – such as ‘Lean’, ‘Six Sigma’, ‘Lean Six Sigma’…and on and on.

However, the fundamental truths within SSM (i.e. about people) were understood and accepted within the academic world of systems thinking…which then became that much softer.