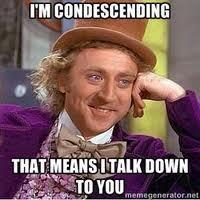 If you are a ‘leader’, how many times have you said “well done team, keep up the good work!” How do you think this is taken by those receiving it? Do you think they need to be ‘told’ to do this (the keeping up of the good work)…will they stop if you don’t?

Conversely (putting yourself in the other person’s shoes), how many times have you had some senior person who you don’t really know use the “well done…” phrase (or similar) either in an email/intranet communication or whilst doing a ‘press the flesh’ floor walk….and how does this make you feel?

How about when something major is implemented after months, if not years of hard work – is there an ever increasing level to this “well done…” message as the senior manager, then GM, then Exec. say ostensibly the same thing?…and, underneath this, do you think ‘if only they knew the half of it!’

The people who you really appreciate comment from are those who you know really understand what you (personally) have been doing/ going through, what successes you have achieved and the obstacles you have battled through to get them.

…and the comments that are most useful are the highly specific ones.

Some thoughts on praise from a chapter within Alfie Kohn’s eye-opening book ‘Punished by Reward’:

Kohn explains that the available research (of which there is plenty) has identified a number of reasons as to why ‘praise’ may fail to boost achievement and, in fact may drag it down:

So, what does Kohn say we should do? He puts forward two general principles as the standards by which all praise should be measured:

Now, I’m not suggesting that senior management should stop showing their appreciation. Far from it! Instead, I am noting that people believe this to be genuine when they know that the comments: comes from someone who ‘really does understand’; are specific to the receiver and what they did; and are not rationed according to some rating and ranking mechanism.

…which ties in nicely with the need for management to meaningfully ‘Gemba walk’ often.