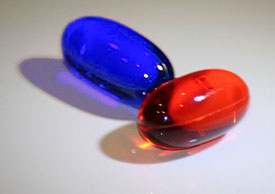 At the end of the ‘Improvement through Systems Thinking’ course I run, I facilitate a conversation about going back out into the real world. I use the ‘blue pill/ red pill’ Matrix analogy.

I got talking with one of my previous course attendees the other day…and neither of us knew whether it was blue or red we should be taking!…so, after looking up the script (thanks H)…here it is:

“You take the blue pill – the story ends, you wake up in your bed and believe whatever you want to believe. You take the red pill – you stay in Wonderland and I show you how deep the rabbit-hole goes.”

Just to confirm (in case you weren’t sure), I took the red pill some years ago!

We got to reading a few more quotes and, wow, I’d forgotten what a classic film that is, and how cool some of the quotes are.

In respect of normative change:

“Sooner or later you’re going to realize just as I did that there’s a difference between knowing the path and walking the path.”

“I’m trying to free your mind, Neo. But I can only show you the door. You’re the one that has to walk through it.”

On the dominant command-and-control management system:

“The Matrix is a system, Neo. That system is our enemy. But when you’re inside, you look around, what do you see? Businessmen, teachers, lawyers, carpenters. The very minds of the people we are trying to save. But until we do, these people are still a part of that system…you have to understand, most of these people are not ready to be unplugged. And many of them are so inured, so hopelessly dependent on the system, that they will fight to protect it.”

Now, I’m not suggesting that corporate life and the matrix are directly comparable but I hope you see the well meaning intent in the comparison.

And, finally, on showing people the reality of their command-and-control system, and helping them move towards a better (systems thinking) place:

“I know you’re out there. I can feel you now. I know that you’re afraid… you’re afraid of us. You’re afraid of change. I don’t know the future. I didn’t come here to tell you how this is going to end. I came here to tell you how it’s going to begin. I’m going to hang up this phone, and then I’m going to show these people what you don’t want them to see. I’m going to show them a world without you. A world without rules and controls, without borders or boundaries. A world where anything is possible. Where we go from there is a choice I leave to you.”

The ‘you’ in the above being the dominant command-and-control management system rather than any individual within.