Skip to content
HomeHave I got a deal for you! 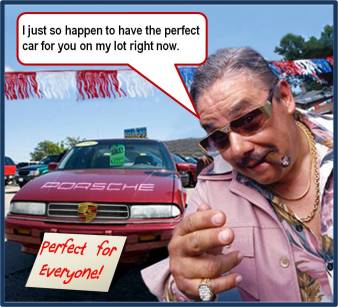 Which industry are we really suspicious about, and is the butt of jokes around the world? How about the car salesman?

So why do you think we are so suspicious?

….you might be able to add a whole heap more experiences to the above!

Actually, car salesmen are nothing compared to big financial services business. Let’s move across to the UK Financial sector and have a look at the carnage of the last few decades:

They all shared the same ‘miss-selling’ credentials

So, what’s the common ingredient?

Well, that would be the offering of sales incentives (contingent rewards).

The point is that, if you offer sales incentives, you can virtually guarantee that you will cause dysfunctional behaviour that goes against your (stated) ‘customer’ purpose.

Remember that a valid purpose statement should say something about “helping people…” It does not say “sell what you can to them”. We need to remind ourselves about a system and that ‘sales’ is but one component of it.

If you offer sales incentives, you can expect the system to ‘bite back’ in the form of undesirable discounts and terms given, failure demands from customers contacting you again, cancellations, complaints, debt collection costs, returns and after service costs… all of which will be un-measurable back to your brilliant sales incentive scheme.

You can of course try to put in place ‘compliance’ controls to monitor all these ‘side effects’ but a) you won’t catch the majority of them and b) this is just an additional (and expensive) layer of costs, and waste.

The sobering thing about the UK financial service miss-selling scandals is that the eventual costs dwarfed the original supposed sales benefits! What a huge waste.

If you offer sales incentives, you can expect:

If these incentives are to individuals, you can expect reduced co-operation between ‘colleagues’, who are now in competition for those elusive sales…even leading to sabotage.

Such competition will actually harm, and prevent those many sales that would have occurred because of co-operation between colleagues.

If these incentives are for particular products, you can expect other products to be ignored, and even denigrated in favour of chasing the reward…even if the non-incentivised product was what the customer actually needed.

If you add targets to achieve these incentives, you can expect games to be played:

And, given that the customer isn’t daft, they ‘feel’ the sales process as opposed to experiencing someone that actually cares about them…providing an awful experience and a massive (yet missed) hit in reputation.

There’s nothing ‘rocket science’ about the above. We all know and recognise it (it happens to us as customers and we hate it!)…yet many of us still work in management systems that think that sales incentives are a good idea.

If you think that the bad practices described above are only carried out by a handful of ‘bad people’ then you don’t understand human psychology. In fact, the majority of people are having to play a ‘game of survival’ within their incentivised ‘meet target’ management regime and feeling pretty bad about it too…it certainly doesn’t meet their much talked about personal purposes. You’d have to be a pretty strong person to go against the system…and you might not last long in such an organisation if you do!

It’s not a case of ‘bad people’…it’s a case of ‘good people’ having to work in a ‘bad system’….which brings to mind Deming’s quote:

“A bad system will beat a good person every time.”

To close: Going back to our car salesmen opening, most dealers assume that they won’t shift cars without sales incentives. John Seddon, in his latest book ‘The Whitehall Effect’, refers to a Canadian auto dealership client that:

They removed sales incentives, set out a customer brochure describing all the industry sales tricks and promised that none applied here. Salespeople now co-operate with each other, customer trust improved, sales went up and long term customer relationships were forged.