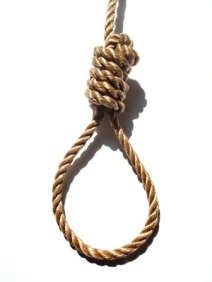 If you pick up a shiny new thing, perhaps a tool or methodology but don’t have a true understanding of the underlying thinking….then you’ve probably just found yourself with enough rope to hang yourself.

Note: I don’t put myself above being at risk of suffering this condition 🙂

But wait, don’t rush off just yet. Why do we get the failure demand?

Oh, too late, someone’s rushed off…

John Seddon uses the example of a senior civil servant in the UK Government finding out about the failure demand concept and (using their existing command-and-control mentality):

So, what do you think would happen?

Therefore the data collected is incomplete and distorted whilst the initiative looks really successful, paying out incentives for things that could easily be achieved anyway. Yet the system hasn’t changed, much of the failure demand remains hidden and much energy (and money) has been spent in wasteful activity.

Looking at this, what is the knowledge that was missing?

They didn’t stop and think to study why the failure demand was occurring. They jumped to use their existing management thinking in the hope of quickly ‘solving’ it.

A huge caveat: “To remove waste, you need to understand its causes”.

“Treating improvement as merely process improvement is folly; if the system conditions that caused the waste are not removed, any improvements will be marginal and unsustainable.” (John Seddon)

If they had studied their system, they would have seen the effects caused by:

If they understood their system, according to its purpose (from the customer’s point of view) and then designed it to allow the people within it to understand its capability (NO targets) and then collaborate across its components (No contingent rewards) to experiment with improvements….then they can successfully identify and remove failure demand…with no need for the waste of monitoring.

Moving on to waste:

Many organisations do the same ‘enough rope’ trick when it comes to waste.

They are taken through Taiichi Ohno’s 7 types of waste, with the 8th waste of untapped human potential added for good measure.

Each waste is explained, with examples, and some really good ‘class room’ understanding is achieved. Some of the more tricky waste concepts (like inspection and transport) take a bit of time to cement into place….but people ‘get it’.

…and so they are off, with their ‘waste spectacles’ donned, looking for waste.

But it goes awry when objectives (with targets) get set around waste reduction, and rewards are tied to achieving this. Management become waylaid with the categorising and reporting on the waste. They have now entered the same ‘existing management thinking’ game as is described above.

To be clear, Ohno didn’t want waste to be classified and reported, he wanted it to be removed. His reason for setting out 7 types was only to assist in spotting it….it is waste to spend your time categorising and reporting on waste!!

What you actually need to do is understand the root cause: why is the waste occurring…and this is far deeper than the process. It usually comes down to the current management thinking (which is rooted in management’s beliefs and behaviours).

Then, and only then, can you actually remove the waste.

Here’s a John Seddon quote that is worth taking some time to ponder:

“Fads and fashions usually erupt with a fanfare, enjoy a period of prominence, and then fade away to be supplanted by another. They are typically simple to understand, prescriptive and falsely encouraging – promising more than they can deliver. Most importantly, fads and fashions are always based on a plausible idea that fits with…management’s current theories and narratives – otherwise they wouldn’t take off.”

Don’t let failure demand and waste become ‘fads’ – they are not. They are very real things which drastically harm an organisation’s ability to meet its customer purpose…but we need to go deeper and understand the why, why, why.