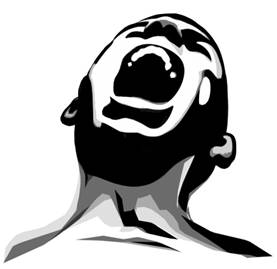 So I was passed a ‘McKinsey Quarterly’* article today by a good colleague of mine. It was titled ‘Ahead of the curve: the future of performance management’.

(*For those of you who haven’t heard of them, McKinsey is a large, well established global firm of Management Consultants)

Reading it made me want to laugh and scream in equal measure!

The glossy journal starts by referring to the “worst kept secrets” in respect of the traditional performance management process i.e. the well known issues with the process that virtually all organisations grapple with.

It then goes on to suggest a number of ‘aha’ insights and then ideas as to what to do about it. 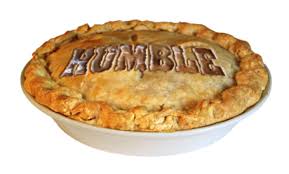 I find it ironic when any consultancy writes such a piece in a style that (in my view):

* Big consultancies have ridden the ‘cascaded objectives – performance management – incentives’ band-wagon for years. We should be suitably cautious when considering what they now have to say.

I’m all for learning and growth, but I’d like some modest acknowledgment when the supposed teacher is attempting to lecture on something that appears to go against their previous decades of ‘wise counsel’.

The McKinsey authors declare in their article that “answers are emerging” in respect of how to change the performance management process, and then go on to talk about what some organisations are experimenting with (including the likes of GE, Microsoft, Neflix).

Now, I’m fine with exploring what others are doing, why and what their outcomes are, but why are these labelled as ‘answers’? Just because someone is doing something doesn’t make it an ‘answer’. There will be other organisations doing the opposite.

The basic problem (for me) with the McKinsey article is that it isn’t built around any fundamental consideration of:

Beware the narrative fallacy: “Turning a sequence of events into a story in an attempt to explain the outcome…this is arguably how methodologies are born.” (‘The Lean Enterprise’ referring to Nasim Taleb’s definition).

Correlation does not equal causation. After all, if we looked at successful organisations a decade ago, we might easily construct an ‘answer’ based around performance management and incentives i.e. the exact opposite.

Things that I agree with

It’s not that I dislike what Google, Microsoft and many others are doing. I like a lot of what I hear about. However, I often don’t like how IT organisations, consultancies and what I perceive as their ‘industry bodies’ (e.g. Gartner, Forrester) write about it.

(* I must admit to muttering a loud “no sh1t Sherlock!” when I read the bit in the McKinsey article that draws on ‘recent research’ that comes to this unsurprising conclusion)

The article turns to “getting data that matters”, where this refers to collecting data about individuals and their ‘performance’. And so it turns to using technology to assist. It puts forward tools that people can use to automate the collection of real-time data on their colleagues, suggesting that this will “free up time” and make the information “more credible”. 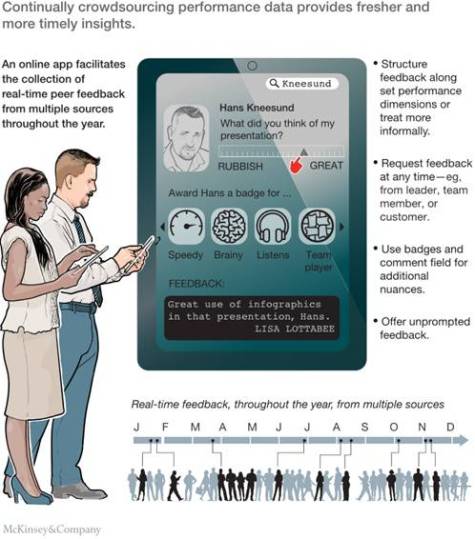 I hope McKinsey won’t mind me reproducing here the‘exhibit’ within their article (McKinsey: if you do then please let me know – I’ll remove it and let the readers know this)

I have a picture in my head of the attendees at every presentation, project meeting, workshop etc. with their heads down, teenager-like, constantly using an ‘app’ to rate aspects of the facilitator’s performance as they arise.

Further, I can almost feel the dysfunctional behaviours occurring: People becoming incredibly careful about what they do and say, so as to get a ‘good score’…and avoid a bad one. It will turn us into performing monkeys, all trying to ‘play it safe’!

Facilitators need to retain the ability to professionally say things that make people uncomfortable, to question the status quo, to challenge conventional thinking…and not fear being immediately marked down for it.

Sod the facilitator’s supposed ‘performance’…I’d rather attendees looked up and collaboratively engaged with what he or she is saying!

“But they are engaging with you Steve, they’re busy rating you and providing valuable feedback 🙂” It’s not the facilitator that needs rating, it’s the system that ‘we’ (the facilitator and audience) are trying to improve!

Now, before anyone thinks otherwise, of course I want valid feedback so that I can improve…but I want to work in an environment in which everyone is relaxed and comfortable with each other, and therefore such feedback is naturally volunteered, in a 2-way conversation. I find it funny that we, as society, often lament ‘the youth of today’ seemingly not able to interact with each other…and yet here’s the wider IT industry (the hungry Great White shark) trying to sell us down the same path.

If you want an example of what technology has done to us, look at email…we used to pick up the phone, even walk to people’s desks!!!

Of course technology may assist…but let’s not set this up as ‘the answer’. Let’s ONLY pull it towards us once we understand the underlying problem(s) and work out what we need to do about it.

“Ahead of the curve”

Near the end of the article, the authors eulogise that: “Companies in high-performing sectors, such as technology, finance and media, are ahead of the curve in adapting to the future…it’s no surprise that organisations in these sectors are pioneering the transformation of performance management. More companies will need to follow – quickly. They need to shed old models…and liberate large parts of the workforce…”

This made me belly laugh!

Hardly “ahead of the curve”…more like laggards! It is arguably the likes of GE and Microsoft (often in the service sector and/or often American-centric) playing catch-up in spite of what those big consultancies (and many an MBA programme) have been peddling towards them for all these years.

…and how does the ‘article’ end?

The McKinsey article states that “It’s time to explore tools to crowd source a rich fact base of performance observations.”

Yep, that’s right folks, it would appear to be simply another case of an ‘expert’ consultancy dressing something up to create their next implementation revenue stream.

Let’s not ‘explore tools’. Let’s get rid of ideologies and, instead, get to the theory underneath…and then experiment with a new management system.

…the role of management is to change the system rather than badgering individuals to do better.”

…now you understand why I didn’t know whether to laugh or scream. You’ve probably guessed that, on balance, I’m screaming.

To McKinsey: In the seemingly unlikely event that you are reading this:

…but I hope that you have the good grace to ponder on my thoughts.