When I was growing up, I remember my dad (a Physicist) telling me that it was pointless, and in fact meaningless, to be accurate with an estimate: if you’ve worked out a calculation using a number of assumptions, there’s no point in writing the answer to 3 decimal places! He would say that my ‘accurate’ answer would be wrong because it is misleading. The reader needs to know about the possible range of answers – i.e. about the uncertainty – so that they don’t run off thinking that it is exact.

And so, with that introduction (and flashback to my school days) this post is about the regular comedy surrounding business cases, and detailed up-front planning…and what to do instead.

A seriously important concept to start with:

Human beings who desire something to be ‘a success’ (e.g. many an Executive/ Senior Manager) tend to:

“make decisions based on delusional optimism rather than on a rational weighting of gains, losses, and probabilities. They overestimate benefits and underestimate costs. They spin scenarios of success while overlooking the potential for mistakes and miscalculations. As a result, they pursue initiatives that are unlikely to come in on budget or on time or deliver the expected returns – or even to be completed.” (Daniel Kahneman)

This isn’t calling such individuals ‘bad people’, or even to suggest that their actions are in some way deliberate – it is simply to call out a well-known human irrationality: the planning fallacy.

We all ‘suffer from’, and would be wise to understand and guard against, it.

I’ve worked (or is that wasted time) on many a ‘detailed business case’ over the years. There is an all-too-common pattern….

“Can you just tweak that figure till it looks good…” 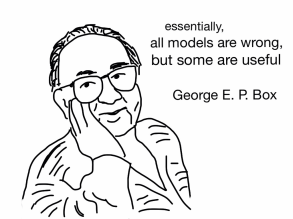 Let’s say that someone in senior management (we’ll call her Theresa) wants to carry out a major organisational change that (the salesman said) will change the world as we know it!

Theresa needs permission (e.g. from the board) to make a rather large investment decision. The board want certainty as to what will happen if they sign the cheque – there’s the first problem1.

Theresa looks around for someone who can write a great story, including convincing calculations…and finds YOU.

Yep, you are now the lucky ‘spreadsheet jockey’ on this proposed (ahem) ‘transformation programme’.

You gather all sorts of data, but mainly around the following:

You create an initial broad-brush model and then, after gaining feedback from ‘key’ people, you work through a number of drafts – adding in new features and much detail that they insist as being essential.

And voila! We have a beautifully crafted financial model that has a box at the end with ‘the answer’ in it2.

You show the model to Theresa.

Wow, she’s impressed with the work you’ve put in (over many weeks) and how sophisticated the model is…but she doesn’t like this initial answer. She’s disappointed – it’s not what she was looking for.

You go through all of the assumptions together. Theresa has some suggestions:

…and, one of my favourites:

“Mmm, the ‘time value of money’3 makes those upfront costs large compared to the benefits coming later…why don’t we extend the model out for another 5 years?”

And, because you designed a nice flexible model, all of the above ‘suggestions’ are relatively easily tweaked to flow through to the magic ‘answer’ cell…

“now THAT looks more healthy! The board is going to LOVE this. Gosh, this is going to be such a success”.

Some (and perhaps all) of the tweaks might have logic to them…but for every assumption being made (supposedly) tighter:

With any and every tweak made, nothing has actually changed: Nothing has been learned about what can and will actually occur. You have been ‘polishing a turd’…but, sadly, that’s not how those around you see it. Your model presents a highly convincing and desirable story.

Going back, your first high-level draft model was probably more useful! It left many ‘as-yet-unknowns’, it contained ranges of outcomes, it provided food-for-thought rather than delusional certainty.

We should reflect that “adding more upfront planning…tends to make the eventual outcome worse, not better” (Lean Enterprise). The more detailed you get then the more reliant you become on those assumptions.

Theresa gains approval from the board for her grand plan and now cascades the (ahem) ‘realisation of benefits’ down to her direct reports…who protest that the desired outcomes are optimistic at best, and sheer madness at worst (though they hold their tongues on this last bit).

Some of the assumptions have already proven to be incorrect – as should be expected – but it’s too late: the board approved it.

The plan is baked into cascaded KPIs…and everyone retreats into their silos, to force their part through regardless of the harm being caused.

But here’s the thing:

“Whether the project ‘succeeds’ according to [the original plan] is irrelevant and insignificant when compared to whether we actually created value for customers and for our organisations.” (Lean Enterprise)

The wider point…and what to do instead

It’s not just financial models within business cases – it is ‘detailed up-front’ planning in general: the idea that we should create a highly detailed plan before making a decision (usually by hierarchical committee) as to whether to proceed on a major investment.

The Lean Start-up movement, led by Eric Ries, makes a great case for a totally different way of thinking:

The big idea to get across is what has been termed ‘validated learning’.

Learning comes from actually trying things out on, and gaining direct feedback from, the end customers (or patients, citizens, employees etc.), rather than relying on our opinions about them.

Validated is about demonstrating what the customer (or patient, citizen, employee etc.) actually does (or doesn’t do), not what they say they would do when asked (i.e. from external market research or internal survey). It is to observe and measure real behaviours, rather than analyse responses to hypothetical questions.

…and to do the above rapidly by experimenting with ‘minimum viable products’ (MVPs).

Delay (whilst writing a beautiful document, getting it approved, and then building a seemingly golden ‘solution’) prevents the necessary feedback from getting through.

Caveat: Many an organisation has read ‘The Lean Startup’ book (or employed a consultant who has) and is using the above logic merely at the start of their legacy ‘investment decision’ process…but, through grafting new labels (such as Lean) onto old methods and retaining central hierarchical approval committees, their process remains ostensibly the same.

You don’t do validated learning merely at the start of an investment process – you re-imagine what ‘making investments’ means!

“It’s moving leaders from playing Caesar with their thumbs up and down on every idea to – instead – putting in the culture and the systems so that teams can move and innovate at the speed of the experimentation system.”

“The focus of each team is iterating with customers as rapidly as possible, running experiments, and then using validated learning to make real-time investment decisions about what to work on.” (Eric Ries)

Notice that it is the team that is making the investment decisions as they go along. They are not deferring to some higher body for ‘permission’. This is made possible when:

…and you’d be right.

Eric Ries’ thinking came about directly from his studying of Deming, Toyota etc. and then applying the learning to his world of entrepreneurship – to become effective when investing time and money.

His book, ‘The Lean Startup’, and the ‘validated learning’ concept are an excellent addition to the existing body of work on experimentation towards purpose.

1. We should never present a seemingly certain picture to a board (or merely hide the caveats in footnotes)…and we should coach them to be suspicious if they see one.

2. For the financially aware: this will likely be a net present value (NPV) figure using a cost of capital (WACC) provided by the finance department, or some financial governance body.

4. Conveniently doesn’t mean intentionally or maliciously – it can just be that lovely planning fallacy at work.

5. Pivot: This word has become trendy in many a management conversation but I think that its original (i.e.intended) meaning is excellent (as used by Eric Ries, and his mentor Steve Blank).

6. PDSA: Popularised by Deming, who learned it from his mentor, Walter Shewhart. A method of iterative experimentation towards your purpose, where the path is discovered as you go, rather than attempted to be planned at the start. Note that, whilst the first step is ‘Plan’, this DOESN’T mean detailed up-front planning of an answer – it simply means properly planning the next experiment (e.g. what you are going to do, how you are going to conduct it, and how you are going to meaningfully measure it).