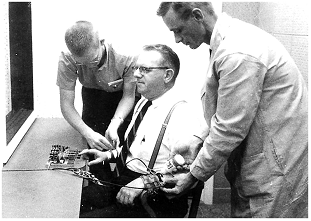 What if we set up an experiment to test how human subjects (and therefore we) respond to ‘authority’ ordering them to break their moral code?

What if this experiment went so far as to order the (effective) killing of another human?!

…and, of immense importance, what do we learn from this?

Some of you may be guessing where this is going: This post is about Professor Stanley Milgram’s infamous1 experiments at Yale University (1960 – 63) in which he wanted to test our obedience in the face of orders from an accepted authority that defy our conscience.

My intent in this post is to clearly set out a hugely significant point such that this can be subsequently built upon (by you in pondering what it means in application to your world, and by me in likely future posts).

The grounds for Milgram’s research were the Nuremburg trials, and the consistent defence from those ‘in the dock’ that they were “following orders” which, to most of us, invokes judgement of amoral and/or cowardly people offering excuses, and fills us with disgust.

But this begs the hugely uncomfortable question: ‘So, given the same orders, would you be any different?’ The answer might ‘shock’ you.

I came across Milgram’s psychology experiments many years ago and was fascinated by them…but it was only recently that I read his book (first published in 1974) that vividly chronicles exactly how the experiment (and its various permutations) was created, carried out, de-briefed and concluded upon…and it is one of the most thought provoking books I’ve ever read.

(Note: The experiment has been reproduced many times – across cultures, genders and in modern times – with comparable results)

Now, for those of you who don’t know (much) about the experiment, here are the basics

* Confederate: An actor who participates in a psychological experiment pretending to be a subject but in actuality working for the researcher.

Here’s how the experiment works:

The experimenter and teacher return to sit in designated seats in the main laboratory next door, ready to begin.

They start simply with “please go on” through an increasing sequence of “the experiment requires that you continue”, then “it is absolutely essential that you continue” and then “you have no other choice, you must go on”.

So, the true question that the researchers wanted to study: At what point (i.e. level of volts) will the teacher disobey the experimenter and refuse to continue delivering electric shocks?

Milgram did a rather cool thing – he staged a lecture on the topic of ‘obedience to authority’ and invited three different groups of people to attend: middle-class2 adults, college students and psychiatrists. He explained the experiment in detail to his audience without disclosing the results in any way.

He provided each person in his audience with a diagram of the shock generator and asked them to reflect on the experiment as just explained to them, and privately record how they believed they would personally perform if they had been the ‘teacher’ subject i.e. mark at what point on the scale they would disobey the experimenter. He then gathered in their responses.

I guess it’s no surprise that not one single audience member (whether middle-class adult, college student or psychiatrist) said that they would administer the 450 volt shock i.e. they all predicted defiance on their part.

Some indicated that they wouldn’t deliver any shocks at all, and a very few indicated that they would disobey at the 300 volt level, with the rest of the audience falling somewhere in between. The mean predicted ‘point of disobeying’ for the middle-class adults, college students and psychiatrists in the audience was 120 volts, 135 volts and 135 volts respectively i.e. no real difference in their thinking.

Further, Milgram realised that people like to see themselves in a favourable light and therefore the above predictions from the audience could have a vanity bias. He therefore asked the psychiatrists a different question: how do you predict other people would perform? They predicted that most subjects would not go beyond 150 volts and that about one in a thousand (i.e. someone with a psychological disorder) would administer the full 450 volt shock level.

Milgram explains that if the actual results were statistically different to these predictions then there is something very important going on that we should want to study and understand.

So, what actually happened?

Well, the results of the experiment were nothing like people’s predictions, and surprised the researchers!

For the basic version of the experiment (as explained above), 65% of subjects (the teachers) delivered the maximum (i.e. lethal) 450 volt shock to the victim and, of the minority that disobeyed, it took until the 300 volt level before the first one did so. Now that’s troubling! It’s important to note that there was a great deal of stress feedback exhibited by the teachers (i.e. it wasn’t a scene of happy compliance)…but, significantly, this didn’t prevent them from continuing.

If you’d like to get a really good feel for what all of that actually looks like, and understand some of the emotions involved, then here’s a very good ten minute YouTube showing the British “mentalist and illusionist’ Derren Brown accurately re-performing the experiment with unsuspecting people for one of his TV programs4. If you’ve read this far (!) then it really is worth watching.

Milgram went on to create 17 variations to the experiment, to find out more and his analysis is highly significant. I hope to write some further posts that explore the reasoning, and its application to our world at work.

A basic conclusion for now:

“The social psychology of this century reveals a major lesson: Often it is not so much the kind of person a man is as the kind of situation in which he finds himself that determines how he will act.” (Stanley Milgram)